The birth of a comet's magnetosphere:
a spring of water ions

Thanks to the work presented in the Friday issue of the Science magazine, both observational and theoretical, RPC-ICA, the instrument that measures the composition of ions onboard the Rosetta orbiter, bore witness of the birth of a comet's magnetic environment, the magnetosphere, due to the encounter of the solar wind with the comet's ever-denser atmosphere. Comet 67P/Churyumov-Gerasimenko awakes!

The contribution of Aalto University researchers, Prof. Esa Kallio and Dr. Cyril Simon Wedlund, consisted in estimating the efficiency of charge-exchange processes around the comet from the Rosetta measurements and the derivation of the comet's activity and the neutral and ion densities from simulations.

Charge-exchange is the process that in which one species X steals an electron from another, such as water H2O:

This is particularly efficient close to the comet's nucleus where a dense water cloud exists and modifies greatly the space plasma environment (see our introduction to space research) of the comet. These estimates led, with a few assumptions on to estimate the activity, or water ougassing, of the comet. The abstract of the article can be found at the bottom.

Right: A 3-D computer simulation of comet 67P/Churyumov-Gerasimenko's charged particle environment and characteristic tail when encountering the solar wind. Water ions H2O+, pictured as a blue-white cloud, are blown away upwards from the nucleus of the comet by the solar wind stream. The solar wind, composed of high-energy particles such as electrons, protons and He2+ nuclei, is represented by coloured arrows, changing from white to red with increasing densities. When the solar wind encounters the comet's ionosphere, it is deflected and slowed down around the nose of the comet.

Once a quasi-equilibrium in the outflowing ionised gas is reached, the solar wind flow is shown moving from right to left on paths called "streamlines". We then slowly rotate around the nucleus, showing the complexity of the comet's neighbourhood. For clarity, the lowest density part of the H2O+-cloud is clipped at the origin, resulting in one hemisphere displaying only the denser insides of the cloud, seen also in the annotated still below. 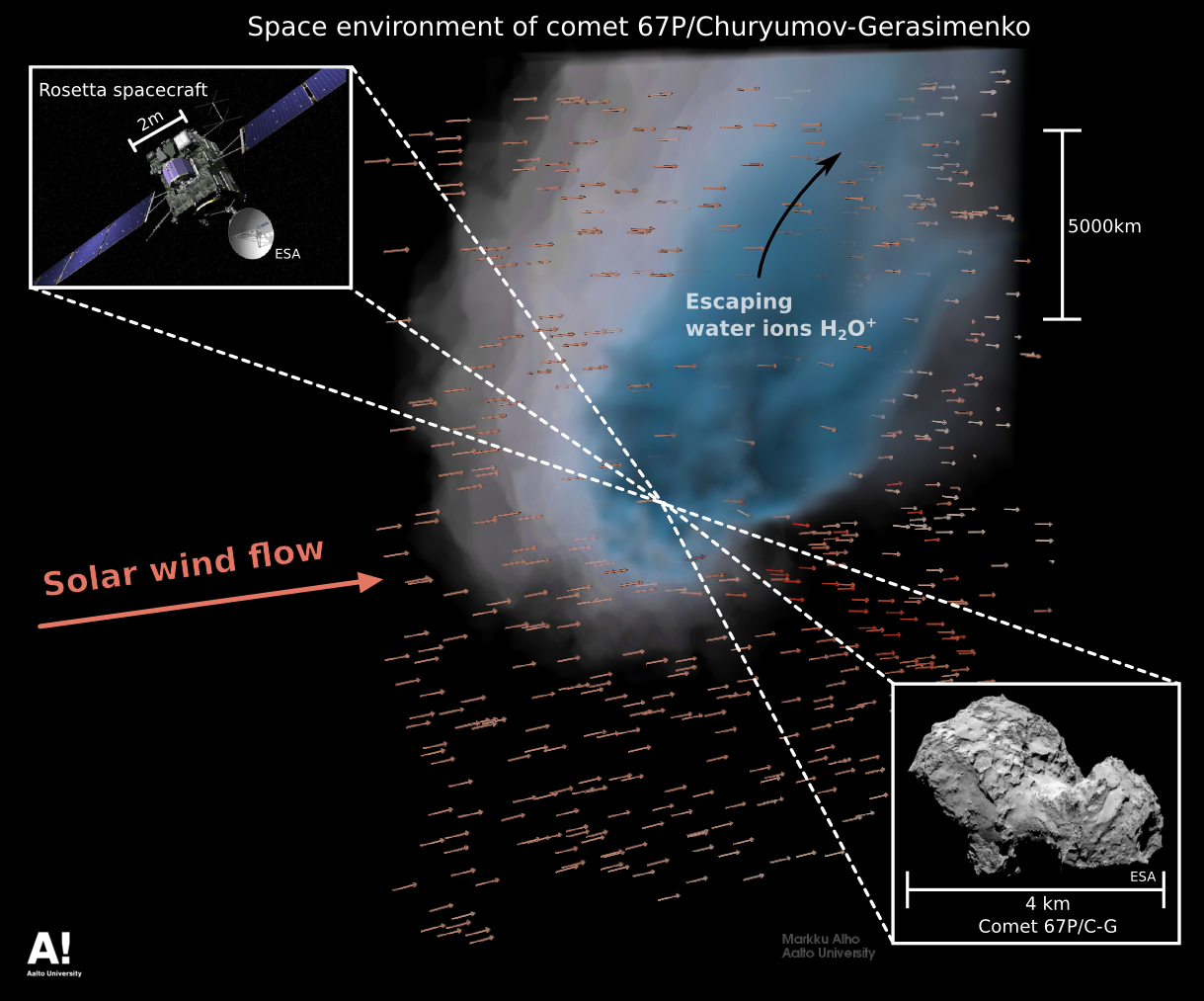 Authors and abstract of the Science article

The Rosetta mission shall accompany comet 67P/Churyumov-Gerasimenko from a heliocentric distance of >3.6 astronomical units through perihelion passage at 1.25 astronomical units, spanning low and maximum activity levels. Initially, the solar wind permeated the thin comet atmosphere formed from sublimation, until the size and plasma pressure of the ionized atmosphere defined its boundaries: A magnetosphere is born. Using the Rosetta Plasma Consortium ion composition analyzer, we traced the evolution from the first detection of water ions to when the atmosphere begins repelling the solar wind (~3.3 astronomical units), and we report the spatial structure of this early interaction. The near-comet water population comprises accelerated ions (<800 electron volts), produced upstream of Rosetta, and lower energy locally produced ions; we estimate the fluxes of both ion species and energetic neutral atoms.

The research is funded by the Academy of Finland and EU FP7 project Integrated Medium for Planetary Exploration (IMPEx).